Okay, it's getting serious here now.  I'm able to spend a bit more time each day setting out our goals for the year rather than just think about it.

Papa is wanting to help me work out a better plan for the day and had asked me to write up some type of schedule for the children.  It's his way of having some input, where he knows what to follow up on each evening.  It's also become apparent that I need some tool to time manage now that I'm teaching music most afternoons. So, here's what I've come up with (with pseudo-names being used) as a general daily guideline: 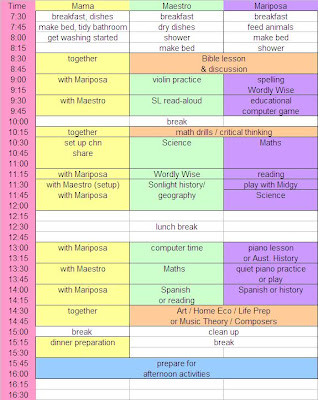 I didn't come up with this schedule idea alone.  I have been reading a few blogposts and came across "Through the Narrow Gate" where she uses Managers of Their Homes to help set out her routine (all stemming from the Well Trained Mind forum!)

This is the most formal I've EVER set out our daily routine.  I ran it by Papa this morning and he was happy with how it all looked.  Then I asked the children what they thought.  Straight away Mariposa picked up that she got her computer time in the morning (which was a 'not before lunch' rule before .. which made 'who/when' an issue), so she was happy.  Maestro told me he wouldn't take as long as I'd given him to do some things, esp. science, but I was allowing for experiments which do take time.  If they finish early, then we'll just move a little quicker.

I like that I can see how much time I'll be aiming to give each child.  I know that Maestro is far more independent, but he still needs time with me to check he comprehends the work to be done and that I'll follow up with checking it's completed okay.  It was actually a bit daunting when I noted that I'd usually leave him to himself most of the time, whilst I worked with Mariposa for quite a bit.  My challenge was setting out their days so I was more equally divided between them.  Of course, it's also expected that the older the children get, the more independent they'll be too.

There will be times I know I'll be able to just work by myself nearby, just so long as I'm there in case they have a question.  That'll be when I'll have my crafts to keep me going, or something in the kitchen to be done (or covering books with contact, as I've been doing since Sunday evening!)

Another plus is that the children could see that if all was done by 3pm, they had free time .. time for friends to visit! .. unless one or the other has a dance lesson to get to (which is usually Wednesday). So, general approval all round.  I guess we'll have to put it to the test to see if it really works, but remember that it'll be used mainly as a guideline.  Nothing too rigid in our timeframes work when we're doing our homeschooling, only other appointments!


Thank you for dropping by!

Your schedule looks simple enough to be workable and interesting enough to keep busy. The best kind! All the best with your new year of learning. :)

Hopefully there's room in your schedule for another visit sometime, like the lovely one we had today. You're a treasured friend. xx

Looks like you put a lot of thought into your plan. I'm sure it will help your days run smoother.

Wow, I'd never think to put computer time before school work was completed! Any screen time normally happens after school here but then again my dd is a bit younger than yours:)

No screen time until after school work was done has always been a rule here, too. I'm just trying this out so I can spread myself out with the children during the day.

All written material and original photographs on this site copyright © 2008-2021 Alecat Music
If you wish to make reference to these posts, please make sure you put in the appropriate link to refer back to the original page. Thank you. :)